“Transnational Politics and the Post-9/11 Novel,” suggests that literature produced after Sept. 11, 2001 reflects a shift from the provincial politics of nation-states to those of transnational politics, and confronts issues that require adjudication across national, geographic, cultural, linguistic, religious and racial borders. Conte cites Don DeLillo’s “Falling Man,” Orhan Pamuk’s “Snow” and J.M. Coetzee’s “Diary of a Bad Year” as examples of work that articulates the emergence of resistance to the global hegemony of the market state and explicitly critiques transnational politics that arise as a result of globalization.

Joseph Conte’s research interests include postmodern fiction, transnational literature and politics, fiction after 9/11, postmodern theory, the literature of immigration, poetry and poetics. He is the author of Design & Debris: A Chaotics of Postmodern American Fiction, which received the Elizabeth Agee Prize in American Literature from the University of Alabama Press in 2002, and Unending Design: The Forms of Postmodern Poetry, published by Cornell University Press in 1991. He has been a SUNY Senior Fellow at the New York-St. Petersburg State University Institute of Cognitive and Cultural Studies in St. Petersburg, Russia and Visiting Professor in Comparative Literature at Capital Normal University in Beijing, China.

In conjunction with the College of Arts and Sciences Centennial Celebration, The Juxtapositions Lecture Series, Department of English and the Center for Global Media, Department of Media Study, present a lecture by Alexander Livergant, “American and Russian Literature: Politics of Translation,” on Thursday, November 14, 2013 at 4:00 PM in the Screening Room, Center for the Arts 112.

The lecture will be followed by a screening of The Woman with the Five Elephants, directed by Vadim Jendreyko, and discussion with Prof. Livergant. 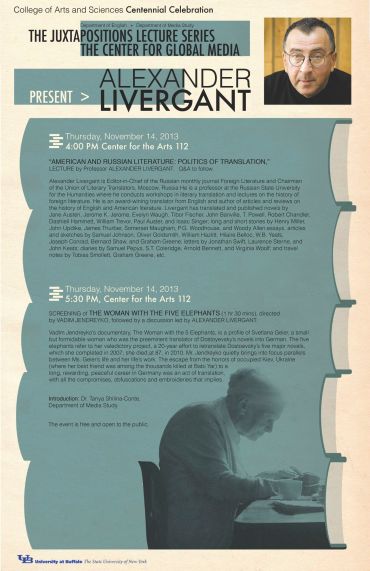